Why The Untouchables Are Unbeatable – TV Guide 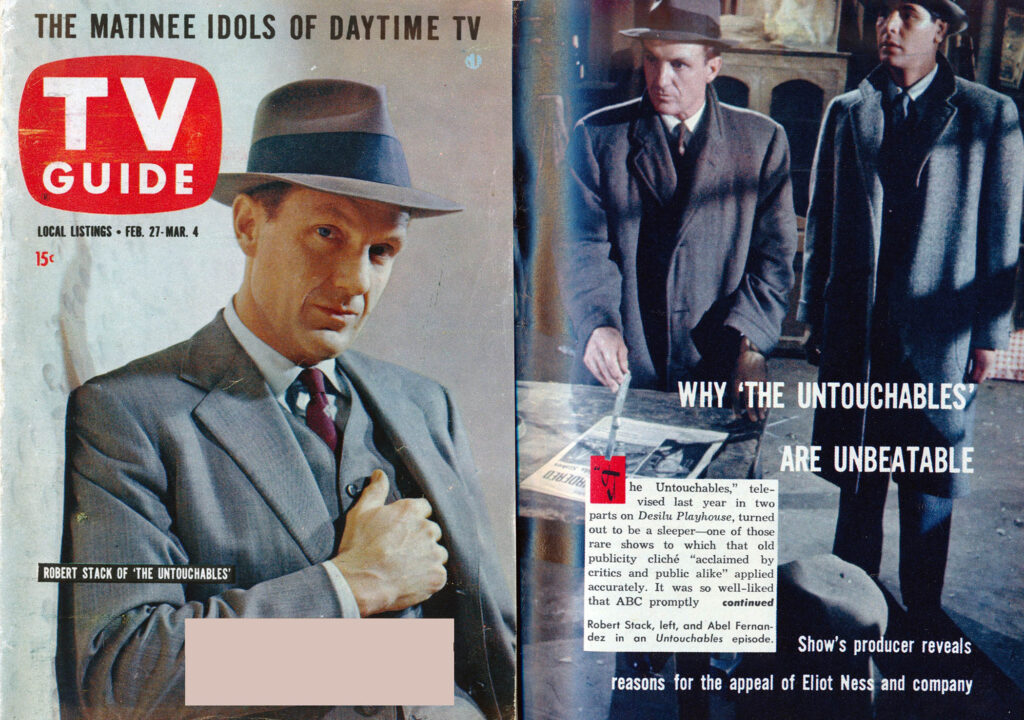 The Untouchables, tele­vised last year in two parts on Desilu Playhouse, turned out to be a sleeper – one of those rare shows to which that old publicity cliche “acclaimed by critics and public alike” applied accurately. It was so well-liked that ABC promptly ordered an hour-long series, a thought which 37-year-old executive producer Quinn Martin solemnly swears never entered his head at the time he was making the original.

Martin, a pleasant-looking man who talks quietly with a sort of half-smile, takes considerable pains to describe The Untouchables series for exactly what he thinks it is.

“Eliot Ness,” says Martin, “would be a bore if you just made him up. It would be sort of like a ballet form of good and evil, as depicted by the TV Western. The fact that Ness actu­ally existed is the real stuff of this series.

“I don’t like the word ‘message’ per se,” he continues thoughtfully. “I think a soap box is a bore. We are concerned first with entertainment. But if, through this entertainment, we are able to leave a feeling, some kind of stimulation of thinking, then I think we can be of value both to our own industry and to the country.

“To do a show on crime for crime’s sake is as big a bore as the soap box. It is an unwritten law in TV that the bad man must wind up with his just deserts. In The Untouchables, without actually making it our primary pur­pose, we are showing why the bad man winds up as he does. It’s a cliche, but the man who lives by vio­lence generally dies by violence, but not specifically because he lives by violence. He winds up defeated, in most instances, because there were ­and still are-men like Eliot Ness and what the newspapers called his ‘Un­touchables’ – men of unquestioned integrity, who happened to believe im­plicitly in law and order and who couldn’t be bought over to any other way of thinking.

“It’s not the proper thing to say publicly, I suppose, but the fact re­mains that crime today does seem to pay in some areas. Back in the Twen­ties crime was pretty much out in the open. You could see it and you could go after it. Today it is much better organized and much less recognizable. It has a variety of respectable fronts. As such, it is actually more dangerous today than it was 30 years ago. It’s easy enough for the private citizen to become enraged when a car full of goons swings down a street spouting machine-gun bullets. It’s not so easy to become enraged when people are quietly and effectively-being fleeced of millions of dollars without realizing it and, sometimes, actually enjoying it.”

Starting with the real-life character of the late Ness (leader of the seven ­man squad of incorruptible Treasury agents), who is played by Robert Stack, The Untouchables bases many of its stories on incidents from the lives of real-life gangsters. “Of course,” says Martin, “we have certain prob­lems, largely legal problems. We don’t want to hurt anyone –say, for instance, the still-living sister or other close relative of one of these men who really never knew just how bad he was. And naturally, we don’t want to leave ourselves open for libel.

In­dicative of the problems Martin faces is a $1,000,000 damage suit recently filed by the estate of Al Capone against Desilu, Inc., CBS and Westing­house Electric Corp., the sponsor, alleging Capone’s name, likeness and personality were used for profit by the defendants in their original production of “The Untouchables” without con­sent of the Capone family.

“There is also a certain amount of dramatic license. If we have a scene in which a Lepke is talking to a Schultz, for instance, we naturally have to make up the dialog. We try to stick to the facts as closely as possible, but we can’t let the facts steer us away from our primary pur­pose-which is dramatic entertainment or let them do harm to anyone, including us.

“After all,” Martin says reflectively, “the FBI gets its appropriations on the basis of the job it does, and it’s understandable that they’d object to credit being given to someone else. We now have a gentleman’s agreement on the subject and we have never since then written Ness into a story that involved the FBI.”

“Early in the season, too, ABC was asked by the United States Attorney’s office in New York not to broadcast the planned third episode, The Noise of Death, until after the trial of the gangland leaders who had been nabbed at Apalachin, N.Y. The episode featured J. Carrol Naish as a fading Mafia leader and the Government felt its showing at that time might conceivably influence the jury. ABC and Desilu agreed to the postponement, even though it was a difficult rush to get a substitute episode filmed.

The Noise of Death was finally aired in mid-January when the Appalachian trial was over. One sponsor, incidentally, thought the episode was so horrifying that it withdrew its participation.”

To date, The Untouchables has touched on the lives of such “name” gangsters as Dutch Schultz, Vincent “Mad Dog” Coll, Wally Lagenza (head of the Tri-State gang), Jake “Greasy Thumb” Guzik, Bugs Moran, and Al Capone – who was the subject of the original two-part Desilu Playhouse.

“Most of these gangsters,” Martin muses, “came to pretty sorry ends. Although never proved, it’s generally accepted fact that Schultz was shot and killed by an organized mob. Coll was shot to death in a phone booth by his own gang. He was so crazy that they were afraid he’d turn on them. Lagenza finally went to the electric chair. Guzik died of a heart attack a few years ago. Moran recently died a natural death in prison. Capon, of course, died pretty much a raving maniac. He would up a physical and mental shell.”

Martin’s staff does a great amount of research, and he himself now knows “more about crime than I ever thought I’d know.” Many of the research reports that come to his desk trace a fascinating trail from the Twenties directly to the present time, complete with names, dates and places, which for obvious reasons, he’d just as soon not even mention, let alone put on film.

“After all,” he says, smiling about halfway, “we’re in the entertainment business.”