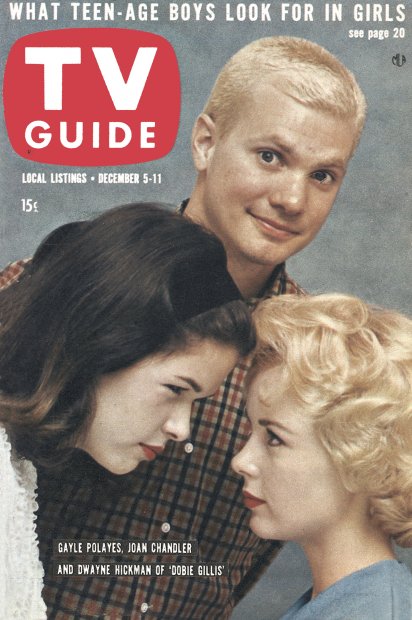 This article was originally published in the December 5th, 1959 issue of TV Guide.

When Robert Stack was first shown the script for The Untouchables, he solemnly shook his curly head and pointed the tips of his well-bred thumbs toward the floor. It was his professional opinion that the story of Eliot Ness, United States Treasury agent, was lacking in something.

“From an actor’s point of view,” says Stack, a 40-year-old California socialite, whose approach to his career has always been marked by a certain detachment, “it had no dynamics. Don’t ask me what that is, but I can assure you it’s a quality that’s mighty important to the leading man, two critics and three other actors.”

For this reason, Stack was cool about playing the Ness role when it was first offered him by Quinn Martin, ex­ecutive producer of the Desilu pack­age, and Phil Karlson, its director and a long-time friend of Stack’s. Aside from the fact that Martin and Karlson thought enough of him to drop by his house and make the pitch, Stack says two things made him change his mind and agree to clean up Chicago-on film, at least.

“For one thing,” he recalls, “Martin and Karlson were painfully honest. They told me I was third choice for the part. They had Van Heflin lined up, but he conked out to do a picture. Then they tried to get Van Johnson. I’m not being sarcastic about this. I admired the outfit’s honesty. I thought if they could level with me, the least I could do was to listen.”

At that time Stack was not inter­ested in doing a television series. Neither were Martin, Karlson and Desilu. That, says Stack, was the clincher. Staunchly conservative as a prominent member of Hollywood’s old guard, he was still thinking of the dy­namics of the box office and the mar­quee. He agreed to do The Untouch­ables as a bloody and beery movie.

“I am just as bewildered as you are,” he says today, as the star of ABC’s weekly hour-long excursion into the skulduggery of the Capone era. “This whole thing came up in such a hurry. Originally it was to be a feature picture. We shot it in four weeks last season as a feature. It was for European release. It was filmed in widescreen.

“Its American release was going to be on television, but nobody thought anything about that. That was just part of the financing. It was to be cut into two one-hour film shows on Desilu Playhouse. Desilu got $125,000 for each show. That made $250,000. But the picture cost $500,000. The other $250,000, plus maybe a million or two profit, was to be made up from theater showings. It went on Desilu Playhouse in April, and I put it out of my head.

“Then in July I was leaving for Japan. Desilu called me. The darnedest thing had happened. The sponsor had an option on the time slot if Desilu would make ‘The Untouchables‘ into a weekly series. It was up to me. I had 12 hours to make up my mind. Desilu was willing if I was, and the whole thing came up just like that.”

Before leaving for Japan, where he had contracted to star in an inde­pendent picture (Andrew Stone’s “The Last Voyage”)’, Stack called Desilu back and consented, but not without misgivings. “The Untouchables,” a Chicago newspaper’s nickname for a seven-man squad (reduced to four in the series) of incorruptible Treasury agents, was based on the life of the late Eliot Ness, the leader. As a picture, Stack was pleased with this rehash of the 1930’s, but as a TV series, it struck him as a little dated.

Then, too, there were other prob­lems. For one thing Fuselli (played by Keenan Wynn), one of Ness’s agents, was killed in the picture. For authen­ticity, he would have to be revived as a regular in the series, always an awk­ward moment for all concerned. That sticky situation had been avoided, however, by having the series begin where the picture had ended- after Fuselli’s death.

And a fact overlooked last June-a television audience apparently as thirsty for the nostalgia of the early 1930’s as for the nostalgia of the Old West-has taken care of Stack’s wor­ries about “dynamics.” Hollywood gossip writers have de­scribed the off-screen Stack as “good­natured,” “stubborn,” “determined.” He developed the last two qualities in self-defense. He is a home-town boy, whose career began tamely in 1939. In “First Love,” his first role, he gave Deanna Durbin her first screen kiss. Universal was charmed but not overly impressed, and assigned its wavy­haired 20-year-old a number of “ten­nis-racket” roles, in which Bob recalls that he mainly bounded on screen to ask, “Where’s everyone? Is tea ready.”

Stack is the first to confess the parts fit. He is the son of the late J. Lang­ford Stack, a wealthy Los Angeles advertising executive, and a fifth-gen­eration member of one of California’s first families. His great-grandfather opened Los Angeles’ first theater; he is a nephew of baritone Richard Bon­elli. (Stack, incidentally, is married to the former Rosemarie Bowe, an ac­tress. They’re the parents of a daugh­ter born Jan. 20, 1957, and a son born May 22, 1958.) At the time he kissed Deanna Durbin, Stack, an ex-Univer­sity of Southern California student, had a three-goal rating at polo.

Five years in the Navy interrupted all that, and Stack returned to Holly­wood with a more determined ap­proach. “To impress this town,” he observes, “you have to skate upside down on one finger, playing ‘God Bless America’ on the harmonica and bal­ancing Jayne Mansfield on one foot.” Stack figures that he performed com­parable feats with postwar roles like the psychotic playboy in “Written on the Wind.” He admits now that he erred in sizing up Eliot Ness as lack­ing the vividness of such roles. “The script wasn’t lacking any­thing,” he concluded.

I was forgetting the audience. They love this guy, and no wonder. Here’s a Government agent making $50 a week and turning down $5000 a week to lay off the mob. I underestimated the appeal of the period, too.

Ness is a hero with free­dom. It’s all in the past, like a Western, so anything goes. It’s not like this sophisticated day and age when you get arrested for jaywalking if you cross the street. A friend of mine is an FBI agent and he’s no more like Ness than I am. They’ve got so many rules and regulations in his outfit it’s all he can do to blow his nose.”

Except for Playhouse 90, a Producers’ Showcase and a couple of half-hour filmed dramas, Stack. had done very little TV. “I wasn’t snobbish toward it,” he says. “I just preferred doing pictures. It’s less back-breaking work.” Since The Untouchables, however, Stack has formed Langford Produc­tions, Inc., with his agent and a busi­nessman friend as partners. The com­pany owns a share of The Untouch­ables and plans to develop other prop­erties as future TV series.

“I’m reading stories,” says Stack, “but so far nothing as good as the Ness book has turned up.” 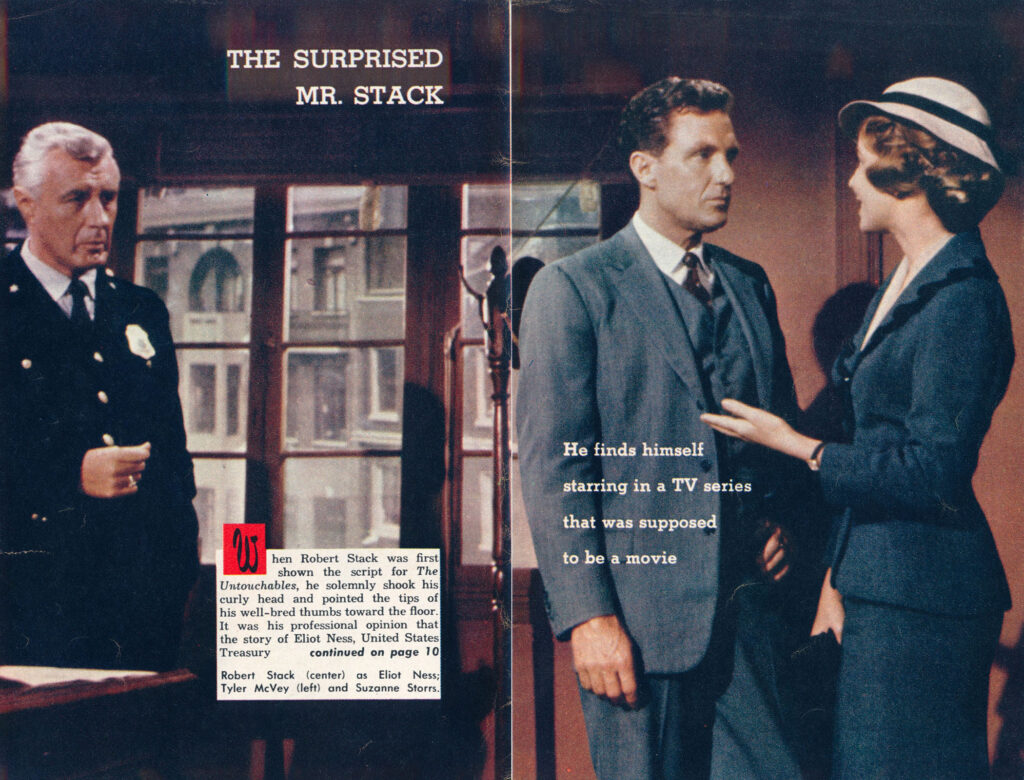 From the original December 5th issue of TV Guide, with images taken on the set of Vincent “Mad Dog” Coll.