“In 1934, the Great Depression was four years old. Al Capone had shifted his place of residence to a federal penitentiary. But the criminal empire which Capone had founded refused to fall apart. It continued to operate its multi­million dollar rackets behind legitimate business fronts. One such front was a firm calling itself Midwest Enterprises, Incorporated. It’s president was a man named Luigi Rinaldo, once one of Capone’s lieutenants and now a powerful figure in Chicago’s vice syndicate. Second in command was his enforcer, a compulsive young trigger man named Paolo Rienzi. “
William Norbert (Jim Backus), is a genius with numbers. So much so that his employer, Luigi Rinaldo (Marc Lawrence), is reluctant to let him retire from his job as bookkeeper for the organization. An honest, quiet man, Norbert has stored all of Luigi’s business ledgers – in his head.
When Rinaldo leaves town on business, Rienzi takes charge and orders Norbert beaten up to ensure his silence. Recovering in the hospital, Norbert resists Ness’s request for help in nailing Rinaldo. Despite Norbert’s loyalty, Rinaldo assumes Norbert may have turned on him as a result of the beating, and orders his execution. His gunmen shoot up his house and car, but miss their target, who phones Ness for protection.

Securing an indictment against Rinaldo, Ness sets up a demonstration of Norbert’s amazing talent for the benefit of the court. Unaided, Norbert adds an endless string of huge numbers without error, and the court rules that his testimony will be considered in the absence of actual ledgers.

To keep Rinaldo’s hoods from harming him, Ness has Norbert moved around the country until the trial date. Despite every precaution, Rinaldo’s men learn of his frequent visits to Kansas City, where they locate his family. Seizing an opportunity, mobsters manage to run down his daughter with a truck, crippling her. Learning of his daughter’s injury, Norbert breaks free from his protective custody and shows up at the hospital, where Rinaldo’s thugs are waiting. Assuming he would go straight for his daughter arrives in time to save his life.
On the day of Rinaldo’s trial, Ness disarms a dozen hoodlums in and around the courthouse, all waiting for Norbert’s appearance. Summoned to the stand, Norbert climbs down from his scaffold where he had been posing as a courthouse painter, and begins his testimony.
”Luigi Rinaldo was convicted on six of the twelve counts. He was sentenced to serve twenty years on each count, one hundred and twenty years altogether. Unfortunately, the sentences ran concurrently. Luigi would have been out in twelve, except for a slight mishap – he died in 1939 – at Alcatraz.”

A naive, but engaging item, Star Witness is rendered so perhaps by the appearance of one friendly and unassuming Jim Backus a few years before he became lost, literally, on an island with Gilligan.

Bad Italians are everywhere. Winchell ticks them off like trains leaving La Salle Street Station: Charles “Fingers” Matsiolli, Marcus Campenello, Al Baciciano, Peatro “Little Pete” Stephano – all of them made up, but sounding like an authentic entry in the New York Times crime section.

There are more than just a couple of corny moments in this installment, but Marc Lawrence’s Luigi Rinaldo is one of those interesting, unpleasant Italians that viewers were beginning to enjoy or detest, depending upon one’s ethnic background. Lawrence has a way of conveying a stiletto-like sense of impropriety in this installment and again later in the series that is at least colorful if not authentic.

• This is one of the few episodes not lensed by cinematographer Charles Straumer. 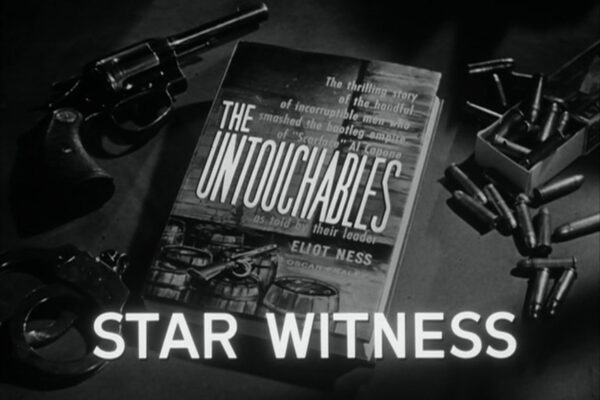 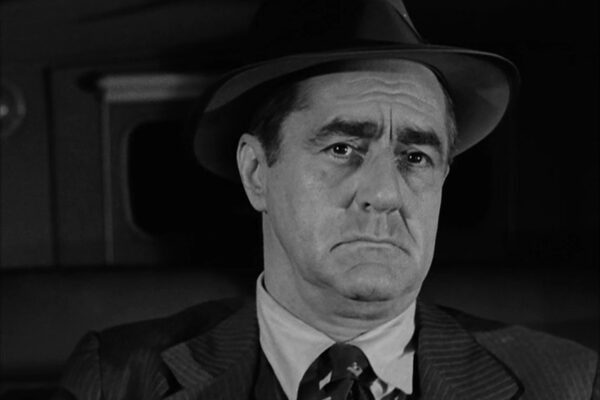 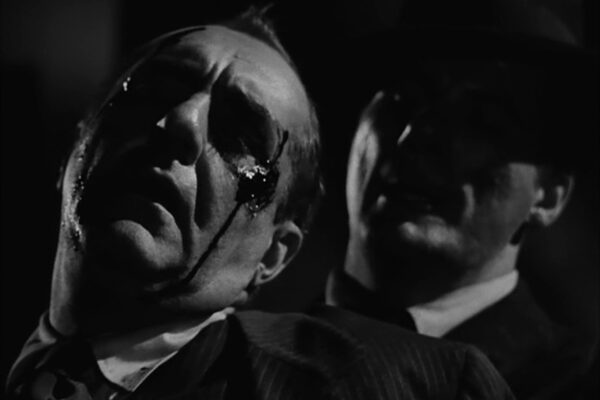 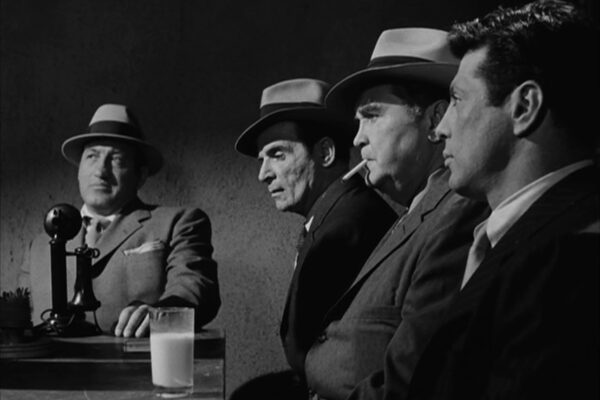 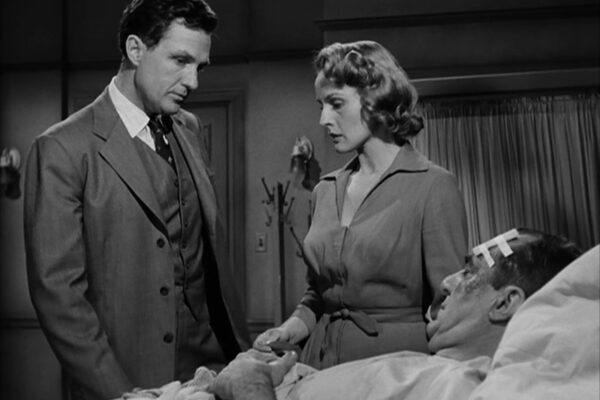 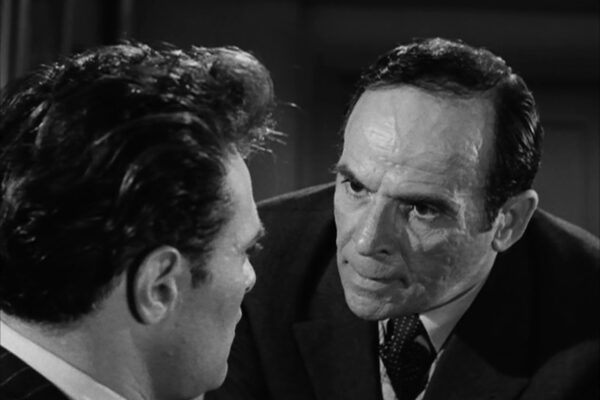 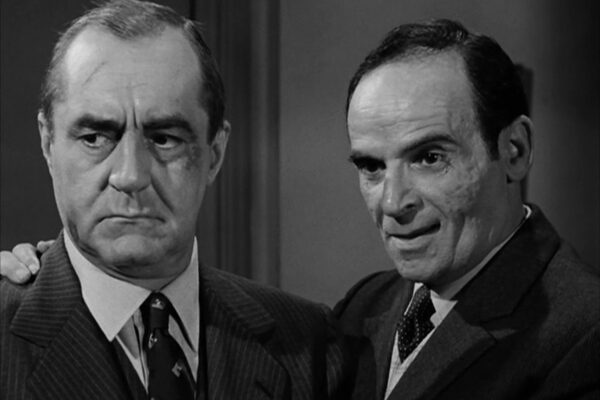 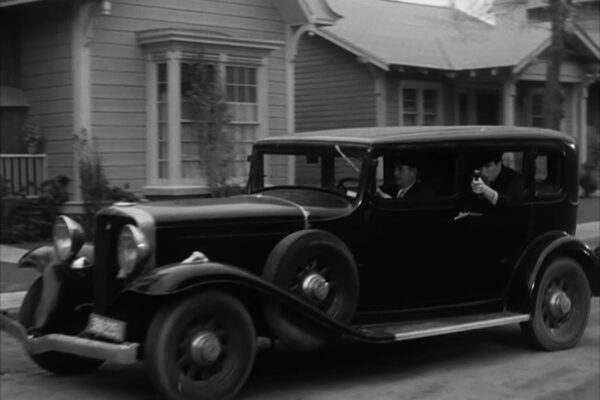 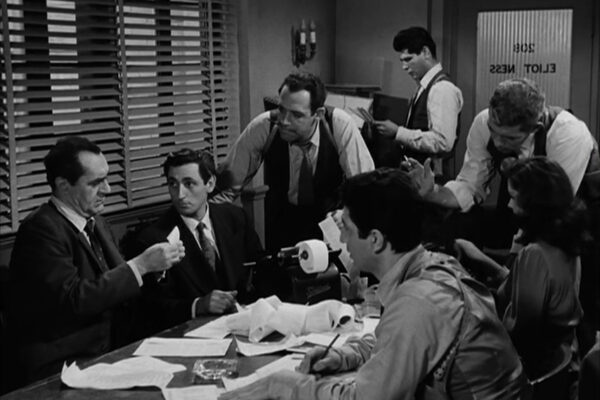 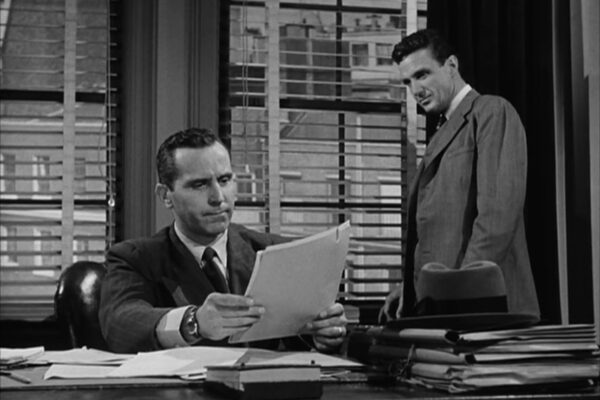 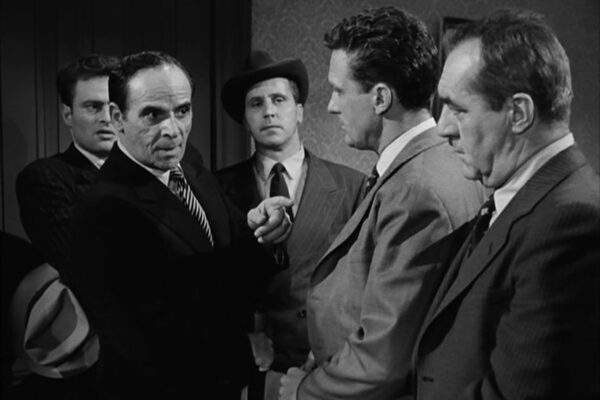 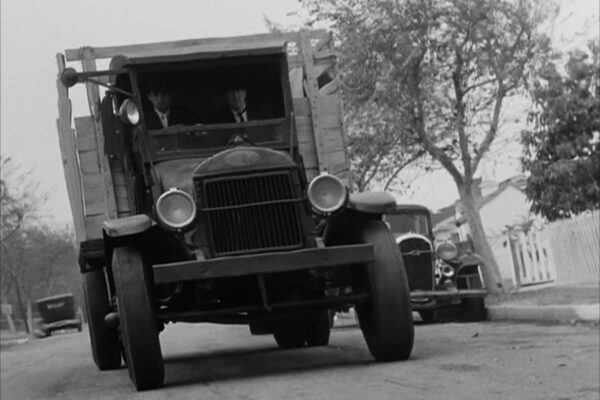 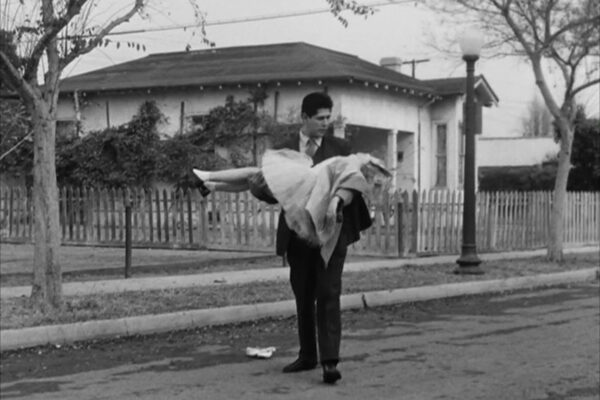 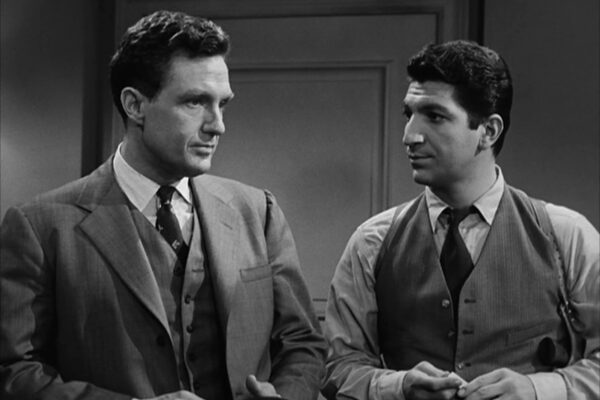 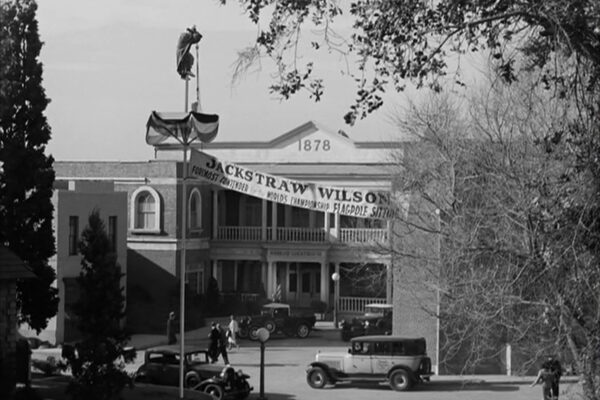 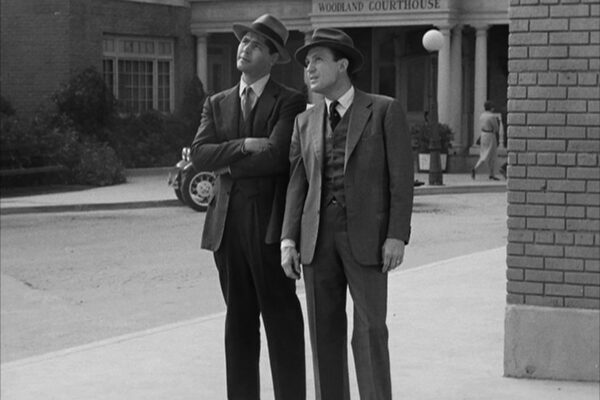 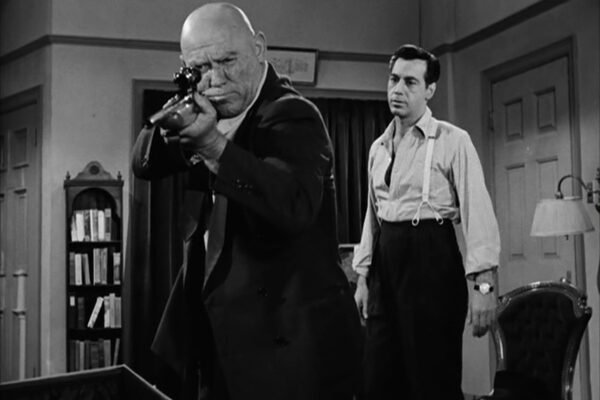 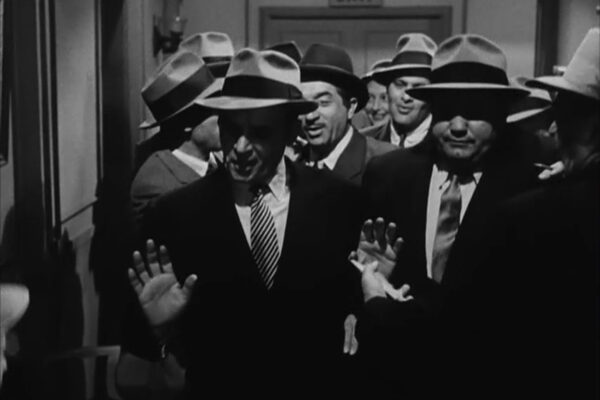 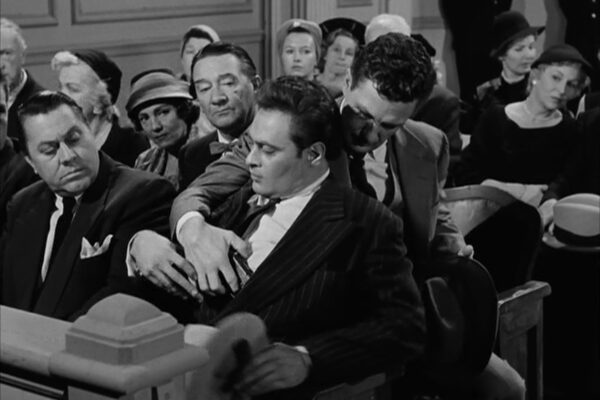 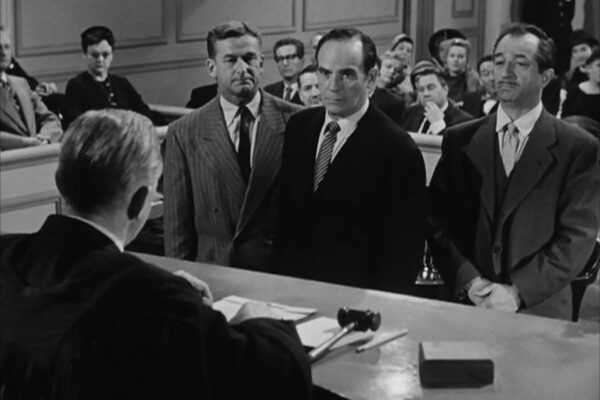 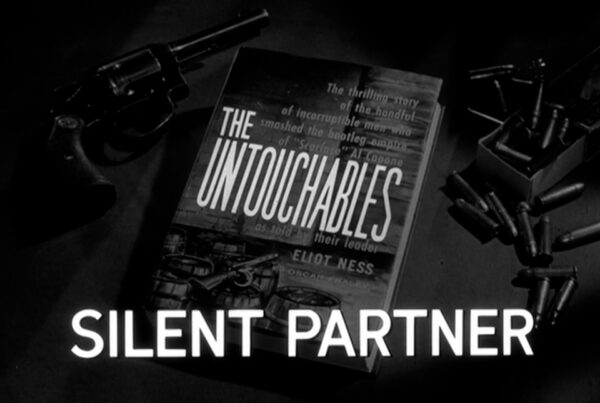